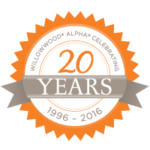 Since it’s release in 1996, Alpha Liners have been helping amputees around the world experience comfort from their prostheses. Thank you for helping make Alpha Liners a successful solution for amputees!

It's been an exciting journey. Learn how Alpha Liners got started and how they are helping amputees.

Providing Comfort and Performance to Amputees

Since becoming a transtibial amputee in the early 1950s, Jeff Witt struggled to find comfort in his prosthesis. The stump socks he used would wrinkle and cause serious sores on his residual limb. The advent of silicone liners didn’t bring Jeff much more comfort either.

“My skin could not stand the conventional silicone liner,” shared Jeff. The interface material was a source of constant irritation, pinching, and sores. “It limited my activity.”

Jeff wasn’t alone in his prosthetic struggles. Bruce, an amputee from Montana, had an idea to hopefully solve this sort of problem. In 1994, the unassuming Montanan wearing a lumberjack shirt and beat-up jeans visited WillowWood. He claimed that a sock with gel on the inside would work better than standard prosthetic socks. To illustrate his product concept, Bruce brought a plaster cast of his residual limb to which he had wrapped hosiery around the outside and covered the inside with a gel made from melted plastic fishing lures.

“It’s not every day that a six-foot, eight-inch fishing guide from a remote part of Montana walks into my office and politely asks for a few minutes of my time,” recalls Bob Arbogast, president of WillowWood at that time. “I felt compelled to listen. And keep in mind that the invention he subsequently proposed to me was intended to be in direct competition with prosthetic socks, a major profit generator of our company. I rarely gamble, so I have to believe that divine intervention was involved.”

Intrigued, Bob decided to take a chance on this idea that had tremendous potential for helping amputees. WillowWood and Bruce promptly began working together to develop the concept that would come to market in 1996 as the revolutionary Alpha Liner.

“I’m pleased and grateful…to the team at WillowWood, to have been associated with the remarkable work of getting Alpha Liners on the market,” Bruce recently shared. “To take a risk around this idea…that is extremely rare, unusual, and courageous.”

In the twenty years since its debut, over two million Alpha Liners have helped amputees around the world find comfort and function in their prostheses. Originally available in only one thermoplastic elastomer, Alpha Liners are now offered in several different types of interface materials and profiles to meet the various needs of the amputee community. Alpha Liners are available for lower and upper extremity use in both prefabricated and custom options. Custom Alpha Liners, referred to as Alpha DESIGN ® Liners, allow clinicians to create liner profiles that are tailored specifically for patient limb shapes, such as short residual limbs, uneven distal ends, and bony prominences on residual limbs, to achieve total contact with the limb and provide a comfortable, functional fit for amputees. Clinical applications of custom liners are also well-suited for Symes, knee disarticulations, and congenital conditions such as PFFD. For Jeff, the advent of Alpha Liners was a blessing.

“The Alpha Liner products have given me the most mobility with the least amount of problems of any liner I have worked with in my 65 years of being an amputee,” shared Jeff. “As Alpha Liners have evolved, the Alpha SmartTemp ® has become my favorite. I use the same liner over my 16-hour days. The Alpha Liner requires no adjustments except when my activity is above my normal level.”

“This has been an incredible time to be alive,” comments Bruce. “The rate of innovation happening within prosthetics demonstrates this.”

Whether it is developing a custom one-way stretch fabric or blending heat management technology with silicone, innovation within the Alpha product line continues. The latest liner innovation, unveiled at the 2016 AOPA National Assembly, is the combination of Alpha Gel with Alpha Silicone in one Liner. The Alpha Duo Liner provides the perfect combination of comfort and durability for amputees.

WillowWood’s engineering team is already busy working on the next advancement in the Alpha family of liners…guided, as always, with the goal of helping amputees be free to live their lives as they wish.