You may have heard of a vacuum socket…or elevated vacuum…or vacuum suspension…or a vacuum-assisted socket… and wondered what these terms mean. Actually, they all refer to a socket with a vacuum pump that removes air from the space between the prosthetic liner and the socket. Removing the air creates what is called “negative pressure” that securely holds the liner against the socket.  And if you’ve worn a liner, you know that it adheres to the skin on your limb. So, with the limb held in place against the liner, and the liner held in place against the socket, the prosthesis is suspended very securely on your limb.

The amount of negative pressure that is required to achieve this secure suspension is different for every amputee. The prosthetist and amputee work together to find a level that is appropriate. When the amputee puts on the prosthesis and turns on the pump, air will be pulled out of the socket until that desired level is reached. However, the amount of pressure doesn’t remain at that level once the amputee starts moving around. Because our LimbLogic vacuum system allows us to monitor the level of vacuum pressure in the socket, we’ve been able to conduct a lot of research on what might be causing these changes in pressure and why they might be relevant to the user.

When the amputee is standing still, there is an equal negative pressure surrounding the limb1. Once the amputee starts walking, the negative pressure fluctuates in response to the motion1-2. In the figure below, you can see how the pressure rises and falls depending on whether the prosthesis is in contact with the ground (stance phase) or swinging forward (swing phase). Amputees using the LimbLogic System will be able to see these changes in vacuum pressure displayed on the fob that is provided with the system. The amount of fluctuation depends on many factors, including the level of vacuum pressure, type of skin tissue, weight of the prosthesis, limb shape and forces/moments generated during walking. 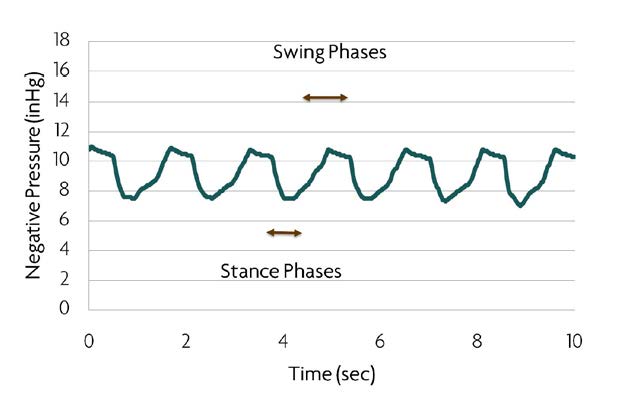 The fluctuation in pressure has also been shown to be an indication of the amount of distal movement in the socket2. Amputees who have experienced distal movement in the socket, which is also known as “pistoning,” know that excessive pistoning can make it harder to control the prosthesis, and can lead to discomfort, skin breakdown and liner wear. So if amputees notice that the vacuum level displayed on the fob is changing quite a bit as they walk, they will know that it’s probably a good idea to talk to their prosthetists about making an adjustment to the socket fit.

Amputees who’ve never used a vacuum system may think it sounds like a complicated way to hold a prosthesis onto a limb, but what it comes down to is this: the benefits associated with elevated vacuum include evidence of reduced volume loss4-6, reduced peak contact pressures4,7, improved limb health8-9, and improved function9. This type of socket has also been cited as providing a superior prosthetic linkage compared to other socket systems4,10 ; as a result it reduces tissue breakdown and skin irritation caused by excessive pressure and shear forces. When used properly, a vacuum socket provides many advantages to the amputee.